God sends encouragement to the believer in amazing ways through His Word.  Personal witness can be challenging as we share our testimony of faith to others.  Sometimes we don’t see the fruit of what we have sown; but never doubt God’s authority over growing His Gospel.  Our personal abilities, opportunities and circumstances to witness for Him pale by comparison to the power of His Word.  Do you doubt the power of His Word in your life?  God’s Word reaches across both distance and time to bring fruit to the labors of soul winning believers, as I am about to show you.

My father was a Christian who shared his testimony with many people during his lifetime.  Although he passed on to be with Jesus almost 40 years ago, God recently used my dad’s strong faith to encourage me quite unexpectedly when I found my dad’s pocket New Testament lying on a book shelf undisturbed.  I placed it there years ago.  The condition of this little Bible is beyond use, as its binding is a rubber band holding the pages together.  I thought its only use was a keepsake – a cherished memory of Dad.

For some reason I felt led to open the Book, just out of curiosity perhaps, to see if Dad underlined a scripture or left something of him inside.  What I found was a treasured message from my Heavenly Father pointed out by Dad that brought tearful joy to my discouraged heart.  Isn’t it amazing how God zaps us once in a while with His love?

Before I reveal the message, I want to share that Dad witnessed about the Gospel to just about anyone who would listen.  He didn’t drink alcohol, but would visit the local taverns in town to share Jesus with the bar patrons.  He worked in the oil fields of California and Alaska and shared his faith with co-workers; a rough crowd by some standards.  He frequently was met with ridicule for being a Christian, but he was not dissuaded.  He encouraged some men he knew to put God first in their lives if they wanted to have successful marriages.  There were many instances of divorce happening at the time.  Alaska was tough on marriages in the 1960’s.  The lack of conveniences drove many wives to leave their husbands for civilization back in the “lower 48”.  One man in particular scoffed at Dad’s notion that God’s love could mend a marriage.  Anyway, that is just a brief glimpse of my father’s personal testimony throughout his life.  He stood strong for Jesus; was not dissuaded; but now I see evidence in his little Bible that he may have been discouraged at times.  So what did he do about it?

Dad searched out God’s Word for encouragement and outlined God’s answer in the Bible so he could refer back anytime he was feeling rejected, tired, or defeated by the enemy.  I also believe that it was God’s plan for Dad to leave the following message so that I would find it so many years later; so that I would be encouraged; and so maybe whoever reads this will be encouraged to strive to be an overcomer – as Jesus plainly instructed believers eight times in the Book of Revelation. 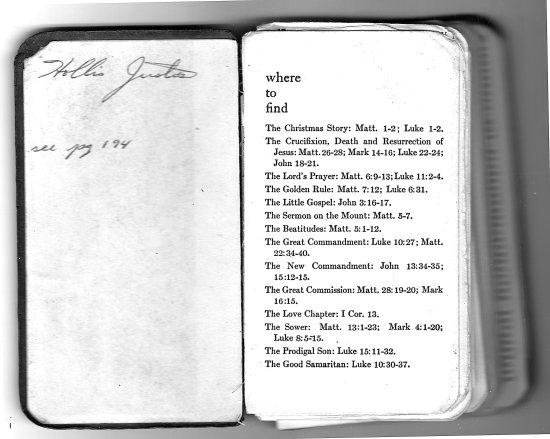 When I opened Dad’s little New Testament, on the very front inside cover was his name and the instruction written in his own handwriting: “see pg 194”.
My first reaction was, “REALLY?”  Some loose pages flew out of the Book in my haste to get to page 194.  Verse 26 of The Great Shepherd’s intercessory prayer for His flock as recorded in John 17 was circled: “I made known to them thy name, and I will make it known, that the love with which thou hast loved me may be in them, and I in them.” 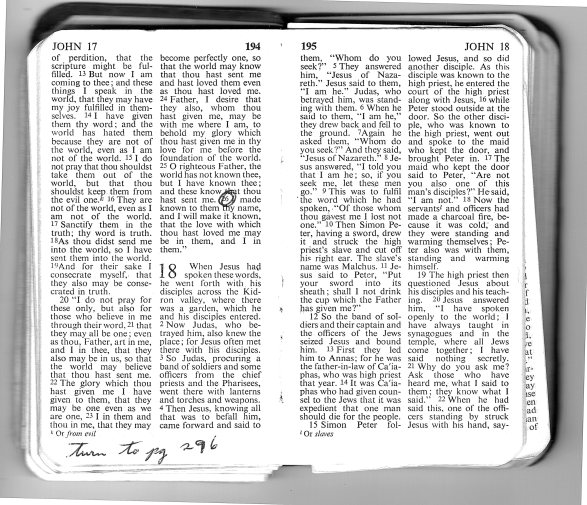 Jesus was the First Witness!  He broadcast the Father’s Name, and wasn’t ashamed!  He spoke to thousands about the Father’s love for mankind! – The very thing He commanded His followers do.  So He never asked us to do something that He never did first.

I encourage you to read the entire chapter to learn how great is Jesus’ love for us.  At a time when He was about to be betrayed by one of His own (Judas) and delivered up for torture and crucifixion – He, who was without sin – prayed for us first, and then gave Himself up willingly to the cross.  He sacrificed Himself for us not because He was guilty of any crime, but out of love for sinners and nothing else!

If I knew that I had but a few hours to live, what would be my priority?  Some are told by doctors to “put your things in order” if diagnosed with a terminal illness; as if “your things” are the priority.  Some people rush to do the things on their “bucket list”- those dreams or goals in life that are unfulfilled.

What did Jesus do?

He prayed.  He gave the Father glory – the number one priority and what we should do first when we pray. Then He prayed acceptance that His life on earth was done.  Then He prayed for us: I am praying for them: I am not praying for the world but for those whom thou hast given me, for they are thine. ~John 17:9.  Jesus became first because He always put Himself last.  This principle is taught throughout God’s Word, and if it was the priority for Jesus, it should be embraced as priority by His followers as well.

I don’t know what my priority will be when my time is at hand to experience passing out of this life, even though I know what it should be.  I can tell you that Dad knew beforehand that he would be joining Jesus in heaven soon.  Yet he kept his priorities squared away.  He gave the Father glory in all things, even though his life was cut short and it may not have “seemed fair”.  He accepted that God’s purpose in his life was finished.  He had lived his bucket list, so that was done.  He prayed for others as church brethren prayed for him.  He continued to read God’s Word as long as he was able.  He continued to love others and shared his faith with not only his friends, but complete strangers that he met at the hospital, community – everywhere his journey took him until he passed out of this world and into the arms of his loving Savior. 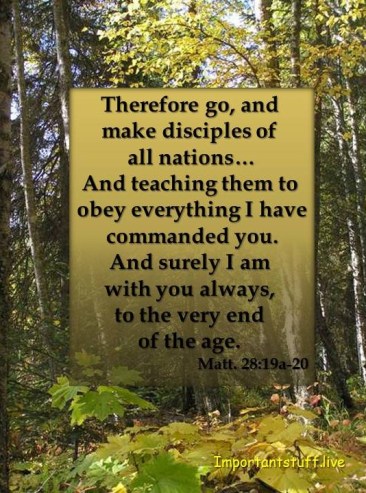 Reading Dad’s Bible message is working a new thing in my life.  I am just beginning to appreciate more than ever what a wonderful gift God gave me.  What started out as curiosity over a family keepsake has set me on a journey into a deepening re-connection to my Heavenly Father.  I’m getting a glimpse of God’s love being greater than distance or time, and obedience to His will being the priority.

There is more to come (Lord willing) as I explore more of Dad’s New Testament message in “Turn to pg 296”.  Don’t miss the next part of the message by following importantstuff.live.